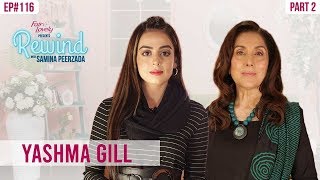 Yashma Gill is a new face in the television industry who has made her mark in a short span of time. She appeared in the blockbuster #WrongNumber2 and is gearing up for her upcoming serial #Alif. Watch her share her journey of self discovery in this very shocking interview!

Subscribe to our channel and get a chance to win exciting prizes http://bit.ly/RewindSubscribe

Samina Peerzada's first ever digital talk show featuring the untold stories of today’s heartthrobs and legends of the past. Watch Rewind with Samina Peerzada's episode every week as we get on a roller coaster ride of emotions, relive the past and discover the secrets and struggles of the emerging stars that shine in the entertainment industry.