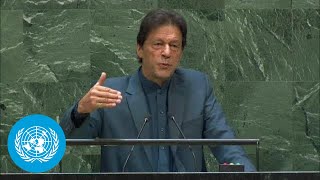 Imran Khan, Prime Minister of the Islamic Republic of Pakistan, addresses the general debate of the 74th Session of the General Assembly of the UN (New York, 24 – 30 September 2019).

Prime Minister of Pakistan Imran Khan today warned that what is going to happen in Kashmir when the curfew is lifted “will be a bloodbath.”

Addressing the General Assembly today (27 Sep) in New York, Prime Minister of Pakistan Imran Khan said, “when a nuclear armed country fights to the end, it will have consequences far beyond the borders.”

He added, "It will have consequences for the world, which is why I repeat I am here, because I’m warning you, it is not a threat, it’s a fair worry that where are we heading?”

On Kashmir, Khan further asked, “what is the world community going to do? Is it going to appease a market of 1.2 billion, or is it going to stand up for justice and humanity?”

The Prime Minister reiterated, “I’ve come here to tell the UN, you got to, this is a test for the United Nations. You are the one who guaranteed the people of Kashmir the right of self-determination. They are suffering because of that and this is the time.”

He also said, “this Islamic terrorism, Islamic radicalism, and sadly used by leaders, this has been the main reason for Islamophobia, and it has caused pain among Muslims.”

The Prime Minister continued, “we, in Muslim countries watch this Islamophobia travelling abroad and it’s getting worse. And may I just say Mr. President that in European countries, it is marginalizing Muslim communities. And we all know that marginalization leads to radicalization.”

For All On-Demand Addresses in the Language of the Speaker:
http://webtv.un.org/meetings-events/general-assembly/general-debate/74th-session/